Opening up the skull again – Surgery #13 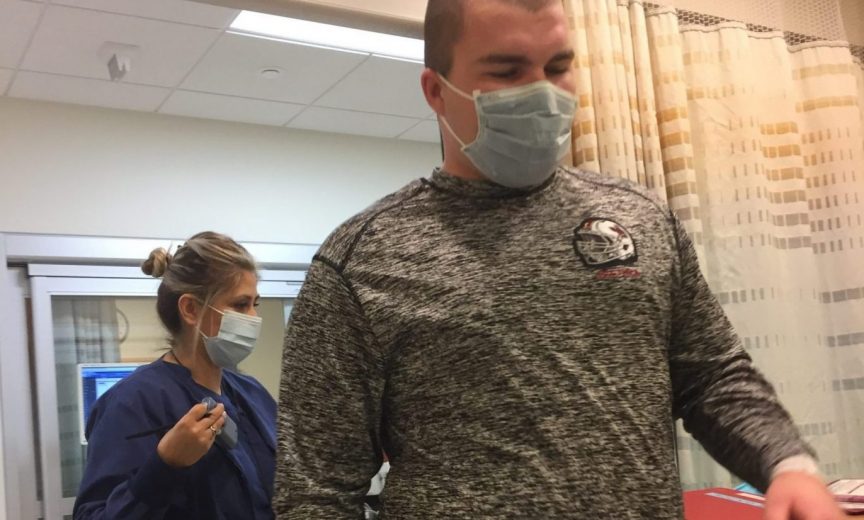 So for the last year, I haven’t felt real good consistently.  Most mornings I wake up with nausea, my vision even though I’ve had surgery still has not corrected it self, and my balance and coordination is not quite where it should be. 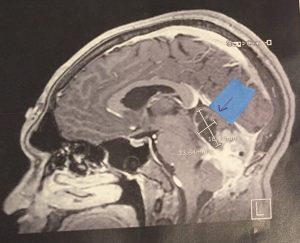 When we did the MRI in December, it showed that where my tumor was removed last year had walled it self off and created an Arachnoid Cyst.  A cyst is a walled off area containing fluid, and in my case the fluid is CSF.  In addition, the Gamma Knife treatment in May created some scar tissue in my brain that in combination with the Cyst was taking up space and putting pressure on my brain stem.

The safest option to take care of the cyst was to create a window in the cyst to drain the fluid.  Well this mean that I had to have the back of my  head opened up again similar to last time so it was easy to access the cyst.  I was not happy at all. 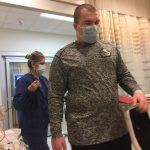 January 22, 2018 I went in to have it done.  One day short of a year from the last major surgery.  Dr. Loudon opened me up again, and accessed the cyst and opened a window to drain it.  But as with any of my journey, nothing was straight forward.  The scar tissue from the gamma knife was extremely dense to where at first Dr. Loudon couldn’t even see the cyst.  Once he moved it out of the way, he fount the cyst.  Then, removed a grape size mass of scar tissue from the area as well.  The hope was by removing both, it will take pressure off the brain stem and allow my 6th nerve – eye alignment – to heal as well as help with my balance and coordination. 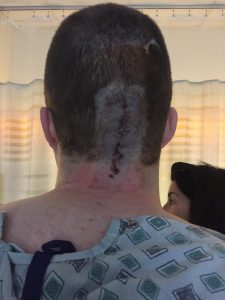 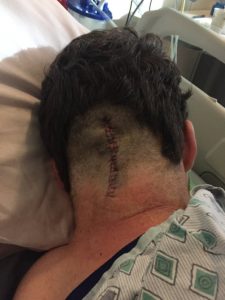 The surgery went well and Dr. Loudon accomplished what he needed.  The next few days were really rough.  Monday it took over 10 hours to get my medications dialed in to relieve the pain in my head.  It was consistently between 7-9 on the pain scale.  Morphine didn’t work – instant vomit – and that put pressure on my head.  Finally they used a combination of Benedryl, Regaline, IV Tylenol and Dilaudid to take the edge off.  So the lack of pain management and sleep were starting to catch up with me.  Tuesday during the day wasn’t too bad and I rested alot.  Tuesday night got interesting from the Dilaudid – gave me hallucinations.  The building across the way from my room was completely empty except in my head, I could see people working out and when they were done, they jumped of the balcony.  The mind is a special place. 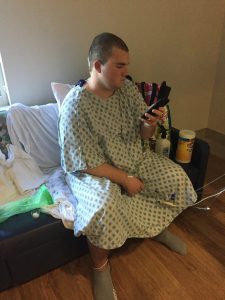 Wednesday was not too bad of a day either and I was looking pretty good for going home on Thursday, but that night all went south.  So when you add up lack of sleep, two days of steroids, hard core narcotics and the stress of the PICU ward your mind takes over sometimes.  One of my biggest fears in the hospital was getting sick so when they moved me from PICU to another ward, it really stressed me out.  That in combination with all the other things I mentioned put me in to a delusional state.  I was 80% in the hospital and 20% in Grand Theft Auto and Fortnight. When the nurses asked where I was, my answer was Mt. Chiliad from Grand Theft auto.  It go so bad that I felt the nurses and my dad were harming me so I decided to leave the hospital and ripped out my IV and headed for the door.  That earned me a trip right back up to the critical ward, PICU.  They needed to make sure I didn’t have any damage in my brain and did neuro checks every hour on the hour.  Dr. Swartz explained that there are times patients who spend a lot of time in ICU, are on narcotics along with lack of sleep and not knowing day from night can have post surgery dillusions.  That was me.  He also mention that it’s similar to Sundowning which Alzheimer’s patients experience increased issues when the sun goes down.
Sure enough, the next morning when I woke up, I was fine.  I also remembered everything that happened and was very apologetic for my behavior. On Thursday, once I got off all my IV medications, ate good,  went through a PT evaluation session, and my neuro surgeon checked me out, I was cleared to go home.

Over the last two weeks, I’ve been resting, working on controlling my nausea and trying to get back to school. 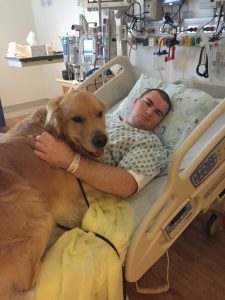 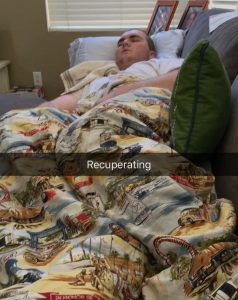